Dr. Andrew Dreyer was born in Minneapolis, Minnesota. He grew up in Montana and attended Pacific Lutheran University in Tacoma, Washington, graduating in 1996 with a B.S. in biology. 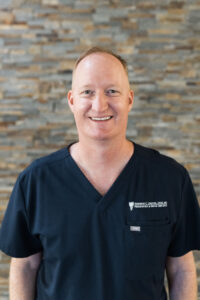 He graduated from Creighton University School of Dentistry in Omaha, Nebraska, in 2003 with a DDS degree. Following dental school graduation, he was commissioned a Captain in the United States Air Force and served one year as a general dentist at Offutt Air Force Base, Nebraska, before entering the joint program in Periodontics offered by Wilford Hall Medical Center (WHMC) and the University of Texas Health Science Center at San Antonio (UTHSCSA). Dr. Dreyer graduated in June 2007 with a Master of Science degree from UTHSCSA and a clinical certificate in Periodontics from WHMC.

Dr. Dreyer attained board certification in the specialty of Periodontics in the spring of 2008, and currently maintains membership in the American Dental Association, California Dental Association, Kern County Dental Society, California Society of Periodontists, and American Academy of Periodontology. In the summer of 2010, Dr. Dreyer separated from the Air Force after a seven-year career. He then relocated to Bakersfield, California, where he currently maintains a practice. Professional involvements have included membership in the Synergy in Periodontics study club, past director of a Spear Study Club, and the Kern Dental Academy, an affiliate of the Seattle Study Club. Dr. Dreyer has served as a member of the Board of Directors for the Kern County Dental Society and the California Society of Periodontists.

Dr. Michael Ha was born and raised in Rosemead, California. He attended the University of California Berkeley for his undergraduate education graduating with departmental honors in Biology.

Next, he received his dental training at Oregon Health Sciences University, graduating with great honors. Having a special interest in helping patients keep and rebuild their natural smiles, Dr. Ha continued his training through a residency in periodontics and implant dentistry at Virginia Commonwealth University in Richmond, Virginia. There he served as chief resident, completed a Master of Science in Dentistry, and obtained a specialty certificate in Periodontics. This advanced training covered all aspects of the treatment of periodontal disease, soft tissue, bone grafting, implant placement, as well as oral and IV sedation.

In his free time, Dr. Ha loves to spend time traveling and hiking. His goal is to hike a mountain in every country he visits. He has volunteered for several dental missions in Guatemala, the Philippines, Oregon, and in Virginia.

Set up a consultation for Periodontal Surgical Procedures

Thanks for subscribing! Please check your email for further instructions.

Due to the current COVID-19 pandemic, Dr. Dreyer will be instituting the following measures to help decrease the transmission rate of the disease: